A Look At the Long History of Pools 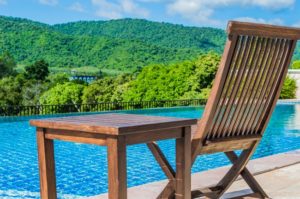 Swimming pools have taken many forms throughout the years. In this blog, we explore the long history of pools, from Roman baths and American swimming holes to the modern in-ground pool.

Pools have existed for quite some time. In some form or another, people have enjoyed taking a nice relaxing dip for the past 5,000 years! This includes the first public water tank we know of, located in the Pakistani settlement known as Mohenjo-daro. It’s a great bath that measures a whopping 12 meters by 7 meters, and scholars mostly believe it was for religious rituals. That’s got us wondering, though, where did the pools that we know and love come from?

The earliest pool culture there was is more similar to what we think of as bathhouses now. The Greeks and Romans began to have such wealth that they could afford luxuries, including big bodies of a commodity like water just to relax in and enjoy. Eventually, the Romans would even make the first heated swimming pool—a 900,000 square foot monolith heated by giant fires below. It was here that the sport of pool swimming began to develop, a tradition that carried on into 1800s Britain.

The Dawn of Modern Pools

When you think of a pool, you likely think of the modern in-ground pools we so often see. Early American pools came from swimming hole cultures, like in Texas, where the Deep Eddy Pool in Austin still stands. After the owner realized the potential, he built an in-ground concrete pool within the swimming hole and eventually an entire resort to go with it. Innovations like this served as the catalyst for a growing market of homeowners who wanted their own pools. This era was marked by other innovations, such as the first above ground pool in 1907, credited to the Philadelphia Racquet Club.

After World War II and the explosion of American exceptionalism and wealth, pools as we know them started to take shape. Once Hollywood movies came around, everyone started to understand what a pool was and it was associated with luxury and opulence. Once more people began desiring their own pools, more started to sprout up. Nowadays, it’s hard to imagine a place that doesn’t have pools, as nearly every country does.

If you still have questions about how to build a brand new swimming pool, Sunrise Premiere Pool Builders LLC is here to help you. We here at Sunrise Premiere Pool Builders LLC can build and install your pool or spa and also provide you with pool chemicals, services, and more. If you have questions, feel free to give us a call at 410-349-3852. To see more from us and for tips and tricks, be sure to follow us on Facebook, Twitter, Pinterest, and LinkedIn.

Categories: pools | Tags: history, inground pools, pools, and swimming pools
This entry was posted on Friday, November 6th, 2020 at 9:55 am. Both comments and pings are currently closed.

Get a Free Estimate